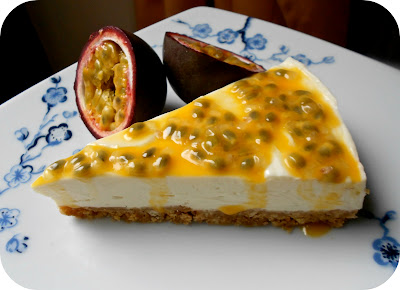 For the last night at our house in Nottingham I thought it would be nice to make a large meal we could all share and eat together. A couple of weeks before hand Pete and I made a lamb hotpot and it was love at first taste...rich, slightly sweet, melt in the mouth and just packed with flavour. One of the other housemates tried a forkful and was rather envious to say the least, the noises that he made were..to be honest..slightly disturbing! He was absolutely adamant we had to make it again as our goodbye meal, along with the homemade garlic bread that went with it perfectly. So we did! And the pudding for this meal is the recipe I am dying to share with you today :)

The same housemate has been bugging me all year for me to make a passionfruit cheesecake. He is not a big sweet eater but said he tried a version of this dessert in a restaurant long ago and the memory of it had remained with him ever since..I had promised him I would give it a good go, no pressure on recreating a favourite hey! My instructions were that it must have a plain cheesecake base, a no-bake basic filling and a passionfruit topping. So off I set trying to find something that would live up to his expectations.. 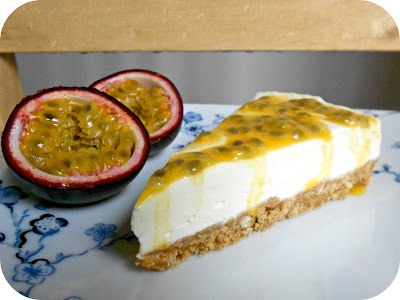 Click to read more yumminess
Posted by Sashquatch at 19:52 No comments: