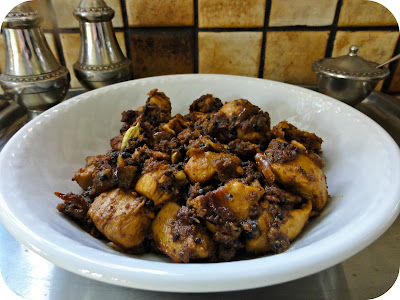 Here goes my second savoury post, and shock horror it's another curry! For good ol' curry night this Saturday I decided to try my hand at a classic vindaloo - something I have never made previously and haven't had that many past encounters with apart from the odd stolen bite from my Mum's plate. But I thought I would give it a whirl as a treat for my Ma and a learning experience for me too! That's one thing I love about cooking, there is alwwayyyss more to learn and new dishes to try out, there's an infinitesimal world of yumminess of which you will never ever reach the end and I love pondering over what might be next :) 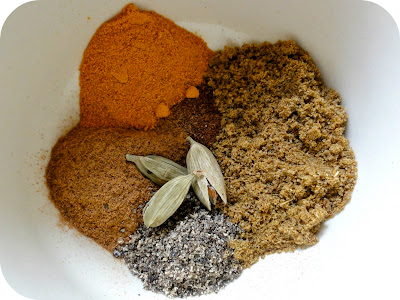 Apart from halving it, I stuck to the recipe pretty closely. Any changes were niggly little ones - chicken breast's rather than thighs, I used ginger paste (love this stuff, lazy person's dream and the smell...oof), pre-ground cloves, pre-ground pepper and whole crushed cardamom pods. These last adaptations were because I do not have a coffee/spice grinder unfortunately, but if I did then I would definitely stick with the whole spices and grind them myself as..well, it's just the proper thing to do! And if you're gonna do a curry, you might as well do it right :) I don't think it makes the world of difference though, and the flavours still come through wonderfully

It's an ugly thing not the prettiest of dishes, but let's not be shallow now, it's what's inside that counts :) This is a very 'dry' curry, there is no sauce to mop up as it were, and personally I prefer a curry with a nice lot of gravy, but that ain't the vindaloo's style and it makes up for it in flavour thats for sure! You can have it as spicy or mild as you wish, but let's be fair - if you are a wuss where spice is concerned then the vindaloo probably isn't your best bet! (I have 2 recipes that would be right up you spice-o-phobe's street though which I absolutely love and will hopefully make again soon for you :) ) 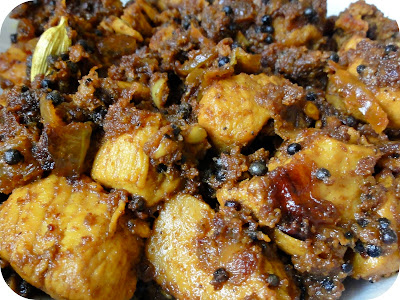 It's a superrrr easy curry to make and this is something I have discovered about Indian food. I think some people mistakingly believe that all Indian recipes are tricky and lengthy to make at home but they are often deceivingly simple, they just have lots of ingredients. Once you have a well stocked spice rack they mostly take very little effort and are pretty cheap to whip up on a whim. So don't be scared off by long ingredient lists, just check the method and you will see you are more than capable of doing it yourself! Below is my halved recipe, you can go to the original link if you want the full sized version :)


Chicken Vindaloo
Adapted from Steamy Kitchen
Serves 2
3/4 lb chicken (2 med/large breasts), cubed
1/2 onion, diced
2-3 dried red chilies (I used 3 and it was veryyy hot!)
3 garlic cloves
1/2 inch ginger (1/2 tsp ginger paste)
1/8 cup white wine vinegar
1/2 tsp cloves (1/3 tsp ground cloves) *
2-3 cardamom pods
1/2 tsp ground cinnamon **
3/4 tsp peppercorns
1 1/2 tsp cumin
1/2 tsp turmeric powder
3/4 tsp mustard seeds
1 cup diced potatoes (optional, I did not use)
2 Tbsp olive oil
salt
Soak the whole chilies, garlic and ginger in the white wine vinegar for half an hour
Grind it into a paste
Coat the chicken pieces in the paste and leave in the fridge to marinate for at least an hour
For the dry spice: mix the cloves, cardamom pods, cinnamon, peppercorns, cumin and turmeric. Grind them in a coffee/spice grinder + set aside
Heat the oil in a heavy pan and add the mustard seeds
When the seeds start to pop, add the diced onion and fry until it turns a light golden brown
Add the chicken with all the juices and fry for a few minutes
Add the dry spices and salt, mix all together and cover pan with a lid
Let simmer over medium/low heat, stirring occasionally, until chicken is cooked through and curry has thickened (approx 10/15 minutes)
Garnish with chopped cilantro if desired and serve with bundles of rice
Notes
* Ground cloves are slightly stronger than their whole-then-ground counterpart, hence using slightly less of the pre-ground version, next time I think I will decrease a little more to 1/4 tsp
** I think there was a bit of a cinnamon taste to this curry too, so next time I would lessen it to 1/4 tsp
Clickity click for a Printable 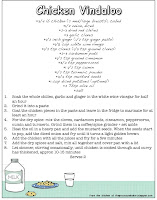